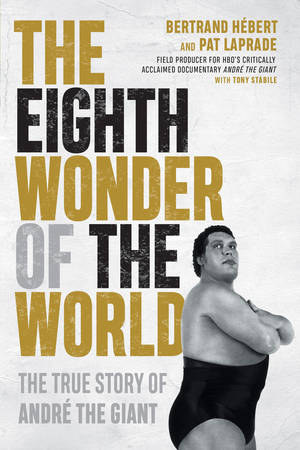 The Eighth Wonder of the World

The most definitive and exhaustive biography of André the Giant on the market. While exploring André’s amazing in-ring career and the indelible mark he left on pop culture, Laprade and Hébert have crafted the most complete portrait of a modern-day mythical being.

The recent HBO documentary André the Giant is the most-watched sports documentary in HBO’s history, and author Pat Laprade was a field producer on the project.
The book features interviews with André’s family and friends and examines who he was as a public figure and wrestler, as well as a person experiencing gigantism.
Recounts André’s behind-the-scenes experiences and reflections on his role in the cult classic film The Princess Bride.
ECW will target our well-established wrestling media contact lists to share the book with the wrestling community.